For the past few years, my uncle has asked me to help him write his annual Christmas letter. He’s the mastermind behind the concept. I just help him execute it. This year’s letter was particularly fun.

In a not-so-stunning development, President Elect, Donald Trump denounced Santa Claus in a public rally on Thursday night. “Santa can go wherever he wants,” Donald said, “But I’ll tell you where he can’t go: here.” The President Elect went on to declare that as long as he is in charge, “no jolly fat man in a red suit” or his “stupid little slaves” will be allowed in the United States.

His comments were in answer to a question about his recent tweets where he labeled Santa a communist. 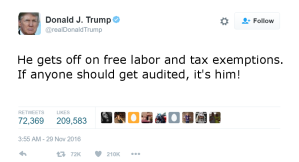 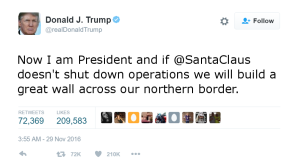 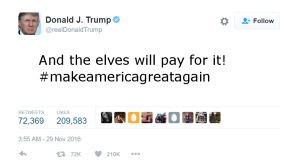 At the rally, aides to Ted Cruze, Ben Sasse, and Jason Chaffetz admitted to similar feelings towards jolly old St. Nicholas. Chris Christie complained of the lumps of coal in his Christmas pudding.

One stated, “Clearly, this is a political hatchet job by an overtly partisan foreign agent intent on destroying our constitution.” Governor Sarah Palin noted, “Santa has a long history of stalking and burglary. He has a comprehensive list of every child’s actions, and it is estimated he violates millions of American homes every year.” She went on to site his refusal to cooperate with DMVs across the country and his unlicensed sleigh.

Famed neurosurgeon, Dr. Ben Carson, highlighted another concern. “He is a known drug pusher. Children under his influence experience hallucinations of dancing sugar plum fairies. Mothers and fathers should be concerned about the negative influence Santa has on their children.  These dancing fairies highlight the role drugs play in advancing the homosexual agenda.”

The US Chamber of Commerce announced full support of Trump’s actions, their official statement noting that Santa has not contributed to any CC sponsored super PACs, or supported anti-union legislation. The Chamber allowed that as such time as Santa actively endorses the legislative agenda of Americans for Prosperity, the Heritage Foundation, and the Platte Institute, they will reconsider his suspension. “Until that time,” they said, “we are confident that large retailers like Walmart will produce appropriate gifts at prices of excellent profit margin.”

Meanwhile, malls are encouraged to replace Santa with kiosks protesting Planned Parenthood. Letters to Santa should be replaced with contributions to support the Family Research Council, the Billy Graham Evangelist Association, and the 700 Club.

Pentagon officials refused to comment on the proposal of a northern wall. However, both the NRA and Minuteman militia officials expressed their enthusiasm. Governors in Nebraska, Texas, Utah, and Mississippi have initiated an open season for all reindeer during the month of December.

The President elect ended his speech with a final declaration: “Santa is not Patriotic. Nobody is as unamerican as he is.”

Reporters Barrie Marchant and Daphne Higbee are special correspondents of the Marchant/Higbee FauxNews Service with a focus on political factoids and innuendo.

This site uses Akismet to reduce spam. Learn how your comment data is processed.